The Complete History of Paintball 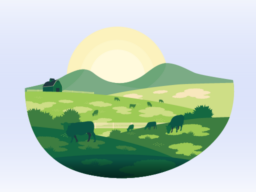 The history of paintball dates back to the 1960s. Since then, it’s changed immensely to become the exciting, diverse game we love today.

From accidental sport to international fame

Maybe you’ve heard the phrase, “Necessity is the mother of invention”? If you haven’t, it means humans invent things because we’re trying to solve problems.

That’s how paintball got its start — people trying to solve a problem.

But the exact problem they were trying to solve will surprise you.

Let’s start there in our look at the history of paintball.

When Did Paintball Start?

Paintball traces its origins back to the 1960s when the Nelson Paint Company made the world’s first paintball.

Why did they wrap paint in a soft, gelatinous casing?

Because they wanted to shoot them at trees and cows, of course.

But it wasn’t just about having fun, though I’m sure they had plenty. They were actually looking for a quicker, easier way for loggers and ranchers to mark trees and livestock without having to make the long trek between each and every one.

Wouldn’t it be quicker if loggers could walk straight through the forest and just shoot at each tree from 50 feet away? Or better yet, from the comfort of their trucks.

Fun Fact: That’s why paintball guns are called markers, because marking things was their original purpose.

What Was the First Paintball Gun?

Oh, that’s right. At this point paintball guns didn’t exist, so Nelson Paint Company needed to invent one. They hired a contractor to design custom CO2-powered pistols to shoot their newly-invented balls of paint. This first paintball gun was called the Nelspot 007 bolt-action pistol, and it’s the precursor to today’s wide selection of the best paintball pistols.

Though the first paintballs and marker were invented by Nelson Paint Company, the actual game of paintball was invented by a pair of avid outdoorsmen, Hayes Noel and Charles Gains.

One day, the two friends were hanging out, enjoying a few drinks, and pondering how well city folk would survive in the woods. Their guess? Not well.

Then the two friends did what we’ve all done at least once — got drunk and had a fun “what if” conversation. In Hayes and Charles’ case, their “what if” led to the first unofficial rules for the game of paintball, put together by their friend Bob Gurnsey. They didn’t get to test drive these rules for years until the next decade.

When Was the First Paintball Game?

The first official paintball game took place on June 27, 1981 in New Hampshire’s dense backcountry as Hayes, Charles, and Bob (plus Charles’s wife, Shelby) invited 8 friends over to test “Paintball” out.

The group of 12 intrepid paintballers positioned 4 flags around an 80-acre field. The rules were simple: Every man and woman for themselves. Capture all 4 flags. Don’t get eliminated.

Because the playing field was so large — and because 6 of the 12 people were those poor city folk without survival skills — Hayes and Charles stationed a referee in the field who had a crucial job: blow a whistle every 15 minutes so no one gets lost.

After several long hours of play, a winner emerged: Ritchie White. His strategy? Win with stealth. He didn’t even fire a single shot!

The rest, as they say, is history.

Let’s take a quick look at the key milestones in the history of paintball:

Is Paintball a Sport?

That depends on who you ask, but yes. How could it not be? You have players battling each other while showcasing skill, intellect, athleticism, and determination.

While paintball isn’t an Olympic sport (yet!) who knows what its future will hold. Just looking at the history of paintball shows how it’s such a young sport that’s gained popularity through grassroots efforts by passionate players to reach international attention.