What are the types of paintball guns? 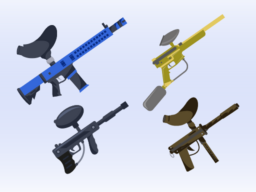 The three types of paintball guns are pump, mechanical & electronic.

It can be challenging to figure out what’s the best type of paintball gun.

We may earn commission when you click certain links.

And that’s before you figure out what firing modes you need, whether you want to upgrade your hopper, and the dozens of other decisions you need to make about your paintball gear.

I’ve broken down everything you need to know about paintball guns into three difference categories:

You should also check out our guide to the 11 Best Paintball Guns. It has our single top pick for 11 common situations, so it’s super easy to digest. You can also view our list of paintball brands.

There are hundreds of different markers for you to choose from—maybe thousands—but they all fit into one of these types of paintball guns.

Pump paintball guns are the originals and are operated with a shotgun-like pump to cock the marker prior to each shot. These types of paintball guns are relatively inexpensive and very reliable, but they make things tougher on the paintballer because of the lower firing rate. Unless you’re really trying to put yourself to the test, you don’t want your pump marker in a game full of mechanical or electronic guns.

Mechanical paintball guns are the best beginner guns because they combine ease of use, affordability, and higher firing speeds than pump paintball guns. Typically, mechanical paintball guns are semi-automatic, meaning each trigger pull fires one paintball, and operate with a blowback design. This means each trigger pull moves a sear catch, which releases a striker held under spring pressure, which then hits the valve to release compressed air, sending your paintball downfield. The firing pressure also pushes the striker back into its starting position only to be released by the next trigger pull.

Electronic paintball guns do away with the mechanized (trigger release) firing mechanism in a mechanical paintball gun and replace it with one of three different circuit-driven mechanisms powered by a 9-volt or rechargeable battery. They’re the most expensive type of paintball gun but offer a ton of fun (and competitive) firing modes, which are explained in the section below.

There are three different types of electronic paintball guns, but note that there’s a lot of overlap between firing mechanisms so guns don’t always fit perfectly into one specific category.

Electronic sear tripper guns have the exact same sear catch, hammer, and blowback design of mechanical paintball guns, except the trigger pull powers an electronic solenoid to move the sear catch instead of the trigger mechanically moving it. While the parts are mostly the same, the upgrade to an electronic solenoid powered by a circuit board gives you a variety of firing modes instead of the mechanical paintball gun’s semi-automatic “one pull, one shot” firing ability.

Pneumatic poppet valve markers operate with the same idea as electric sear tripper markers by using a striker mechanism to hit a valve, releasing the compressed air. The difference is there’s no sear catch or hammer on these guns. Instead, everything is controlled by a single pneumatic ram that quickly (and forcefully) fires and resets. These electronic markers have consistent speeds with efficient use of compressed air for less frequent refills. But note, they typically do not work with CO2.

Spool valve markers are a little difficult to explain with just words, so check out this animation. Essentially, there’s only one moving part—a spool valve—which, when the triggers is pulled, pushes the paintball into the chamber, releases a small pocket of compressed air, and resets back to its original position. There are no hammers and pins to collide like with pneumatic poppet value markers. It’s all one piece of metal. The major advantages these markers have are their quiet operation and nearly non-existent kickback. However, they’re much less efficient with compressed air than pneumatic poppet valve markers.

Fully-automatic keeps firing paintballs as long as the trigger is held down up to a maximum rate of paintballs per second (bps) with maximum allowable rates usually around 15.4 bps for safety purposes. When you want to stop firing, release the trigger.

You can also see four-, five-, or six-shot burst, but the idea is the same. Every time you pull the trigger, you get the same burst of shots.

There are a few types of ramping modes but they all mean basically the same thing: The marker fires in semi-automatic mode until you shoot at least three balls sequentially at a specified rate, generally 5 bps or higher, after which the marker kicks into ramping mode and fires at or near the maximum legal rate. That means even if you’re pulling the trigger just five times per second, the marker still fires at or near 15.4 bps.

PSP ramping is a version of ramping that meets the maximum firing rate rules in place by the Paintball Sports Promotions (PSP) tournament series. It follows the typical ramping description above but fires at a maximum rate of 13.3 bps. Additionally, if you go a full second without pulling the trigger, ramping mode disengages and you go back to standard semi-automatic firing until you meet the minimum firing rate criteria to re-enter ramping mode.

Millenium ramping is used in some European tournament series and has the same 5 bps activation rate but doesn’t have the one second buffer that PSP ramping does. Instead, as soon as your trigger rate falls below 5 bps, Millenium ramping mode disengages and you’re back into semi-automatic mode.

NXL ramping engages at the same 5 bps firing rate to enter ramping mode but requires you to hold the trigger down to stay in ramping mode. As soon as you release the trigger, it kicks back into regular semi-automatic mode.

A subset of the various ramping modes, capped ramping allows you to program the maximum rate of fire once your marker enters ramping mode, whether that’s 12 bps, 13.5 bps, or something else. Uncapped ramping feeds paintballs up to the maximum rate the marker can handle, which usually is determined by how quickly the solenoid can fire or how quickly the loader can feed paintballs into barrel.

Breakout mode (called Gangsta mode on Tadao aftermarker circuit breakers for electronic markers) is an advanced firing mode intended to help you fire a ton of shots without getting caught by the refs. When you pull the trigger, the guns starts out in fully-automatic or ramping mode for a set period of time but then switches to semi-automatic. The idea is that you get off a bunch of shots but then switch to a safe, standard mode by the time anyone notices.

Turbo mode fires every time there’s a trigger event, which means when you pull the trigger and when you release the trigger. This means every pull fires two shots with the timing between the shots dictated by how quickly you pull and release.

Continuing further, there are four other major features that differentiate similar paintball markers.

Centerfeed vs offset refers to the angle at which the hopper sits on top of the marker. Centerfeed markers, unsurprisingly, have the hopper positioned directly over the top of the gun. Offset markers have the hopper positioned slightly to one side, generally the right side. Centerfeed markers are more balanced and thus preferred by many players, especially for speedball. Offset markers, however, have two advantages. First, they allow you to install a sight on top for better accuracy, which is especially helpful in woodsball. Second, offset markers deliver the paintball into the chamber with less bouncing, which decreases the chance of a break.

This refers to how paintballs are fed into the marker. Hopper-fed markers have a hopper on top of the marker that feeds paintballs into the chamber via either gravity or an electronic mechanism (see the next feature on this list). Mag-fed markers use a magazine-style feeding system that’s similar to actual firearms and often creates more realistic-looking weapon in terms of firing, re-loading, and overall gameplay. Aside from the obvious visual similarities between actual firearms and mag-fed paintball guns, paintball magazines also hold fewer paintballs than hoppers. This means less spray-and-pray and more emphasis on both skill and accuracy.

This is all about the structure of blowback designs on mechanical paintball guns and electric sear tripper guns. Stacked tube markers look like this with the compressed air housed in a tube below the chamber. Inline blowback puts everything in a single tube and looks like this. Stacked tube markers tend to be shorter than inline markers, have less recoil, and are more gas-efficient, requiring fewer refills. Inline markers tend to be less expensive and have fewer moving parts.

So, which of these types of paintball guns is best? That’s a heated topic of debate on paintball forums to which there’s no right answer. There are some generally-accepted preferences, such as mechanical markers being best for beginners, but in the end choosing a paintball marker is a highly personalized decision that you must make for yourself.

What are the different types of paintball markers?

Can a paintball gun kill you?

Not unless you get beat over the head with it. 😉 The paintballs aren’t heavy or fast enough. That isn’t to say that paintball safety isn’t the #1 priority when playing.

Can a paintball gun shoot marbles?

Only a troublemaker would ask this.

Can a frozen paintball kill?

First the marbles, now a frozen paintball? Not cool.